Above: Students of Professor Poirier's Constitutional Law course attended a Supreme Court hearing, and then visited Parliament and Rideau Hall, the Governor General's residence, during a day in Ottawa on January 24, 2019.

We are now on social media

You can now follow the MacKell Chair at facebook.com/ChaireMacKellChair and twitter/mackell_chair. Why not give us a like?

2021 edition of the Baxter Competition: Federalism, Identity and Public Policy in Challenging Times

12 August 2020: The Faculty of Law and the Peter MacKell Chair in Federalism are proud to announce that the prestigious Baxter Family Competition on Federalism will return for a third edition in early 2021. We invite you to consult the Call for papers.

This edition’s overall theme is Federalism, Identity and Public Policy in Challenging Times. This broad theme should allow for reflections about the impact of federalism on the current COVID-19 crisis – and vice versa – but by no means should entries be limited to this context. Naturally, comparative perspectives are particularly encouraged.

For the first time, the Competition will be open both to law and political science students/PhD candidates, as well as junior scholars and practitioners from around the world.

Contributors must be registered students or have obtained their degrees, in law or political science, less than 5 years before the submission deadline of 1 February 2021.

The three winners will have the unique opportunity to present their papers at a Symposium in May 2021 in Montreal (circumstances allowing). First-, second- and third-place winners will receive prizes of $5,000, $3,000, and $1,000 (CAD) respectively. The prizes will be awarded by a stellar international jury, whose names and bios will be shared shortly.

Please see the Call for papers for information on author eligibility and paper criteria.

Furthermore, the MacKell Chair is delighted to announce the members of the stellar international jury for the third edition of the Baxter Family Competition on Federalism:

Federalism & the COVID-19 Pandemic - A compendium of (re)sources

11 May 2020: DCL candidate Atagün Kejanlioglu and Professor Johanne Poirier are currently collecting sources on the intersection between federalism-writ-large and COVID-19. We will seek to update every week.

If you wish to contribute to the list, email relevant articles, links, etc. at federalism-covid19.law [at] mcgill.ca.

The FRQ also awarded a doctoral grant to Mr. Atagün Kejanlioglu for his thesis on "The "People" as a Constituted Power: Reimagining Constitutional Amendments as Shields against Populism".

Both projects are under the supervision of Professor Johanne Poirier.

Cooperative Federalism and Intergovernmental Relations:
What's Law Got To Do With It?

In 2019-2021, Professor Johanne Poirier will be leading a major research project on intergovernmental relations and cooperative federalism.

The technical ramifications and legal implications of intergovernmental agreements, as well as their implementation, have been generally neglected by jurists. However, cooperative mechanisms crafted by the executives can have undeniable collateral effects on the scope of parliamentary scrutiny over the executive, on judicial review of administrative action and on the balance of federal architecture.

Professor Johanne Poirier will attempt to fill these doctrinal gaps by studying the law that emanates from, structures and affects intergovernmental agreements. She also plans to initiate a form of “catalogue” of cooperative techniques and of the role played by law in structuring them. While the project is focused on cooperative federalism in Canada, it will benefit from a comparative lens: analysing foreign experience being so often the best way of decoding the particularities of one’s own system.

Ultimately, her work harbors significant potential to provide answers to the various components of the Canadian federations on the uncertainties inherent to the modalities of intergovernmental cooperation, on the stability of cooperative mechanisms and on the courts’ responses to them. A look back at the 2019 Baxter Symposium On May 11, Jan Raeimon Nato, Berihun Gebeye, Catherine Mathieu and Rafael Viotti Schlobach, this year's winners of the essay competition, presented their papers at the 2019 Baxter Symposium, and engaged in lively conversation with the audience. We share some photos of the proceedings. Professeur Johanne Poirier, MacKell Chair in Federalism at McGill University, and Professor Nicolas Levrat, Global Studies Institute, Faculty of Law, University of Geneva, have edited a special edition of the Fédéralisme - Régionalisme (volume 18: 2018) journal that examines the operation of the federal systems of Belgium, Canada, Switzerland and the European Union through the lens of games.

The studies presented in this volume are the result of cooperation between three French-speaking universities outside of France: the University of Geneva, the Université Libre de Bruxelles and the Université de Montréal, which in 2013 instituted the G3 of the francophonie. This consortium mainly supports the creation of research groups between partner universities. Thus was formed a "study group on public policies in the framework of cooperative federalism". Interestingly and unintentionally, it immediately became apparent that the countries in which the G3 partner universities (Belgium, Canada and Switzerland) are located are Federations that implement cooperative federalism in various forms. The issue is open access.

Much has been written recently about language policy in Canada, in light of political developments in provinces like New Brunswick and Ontario, the 50th Anniversary of the Official Languages Act and the announced recognition of Indigenous languages in Canada. The objective of this Symposium is to discuss language policy in Canada, with a particular emphasis on language minorities. The event focuses on Canada’s two official languages and their fate at the federal and provincial levels while also bringing to the fore issues related to other languages present in Canada, including Indigenous languages. See the complete program [.pdf] Metaphors and Constitutional Amendments in Canada and the UK 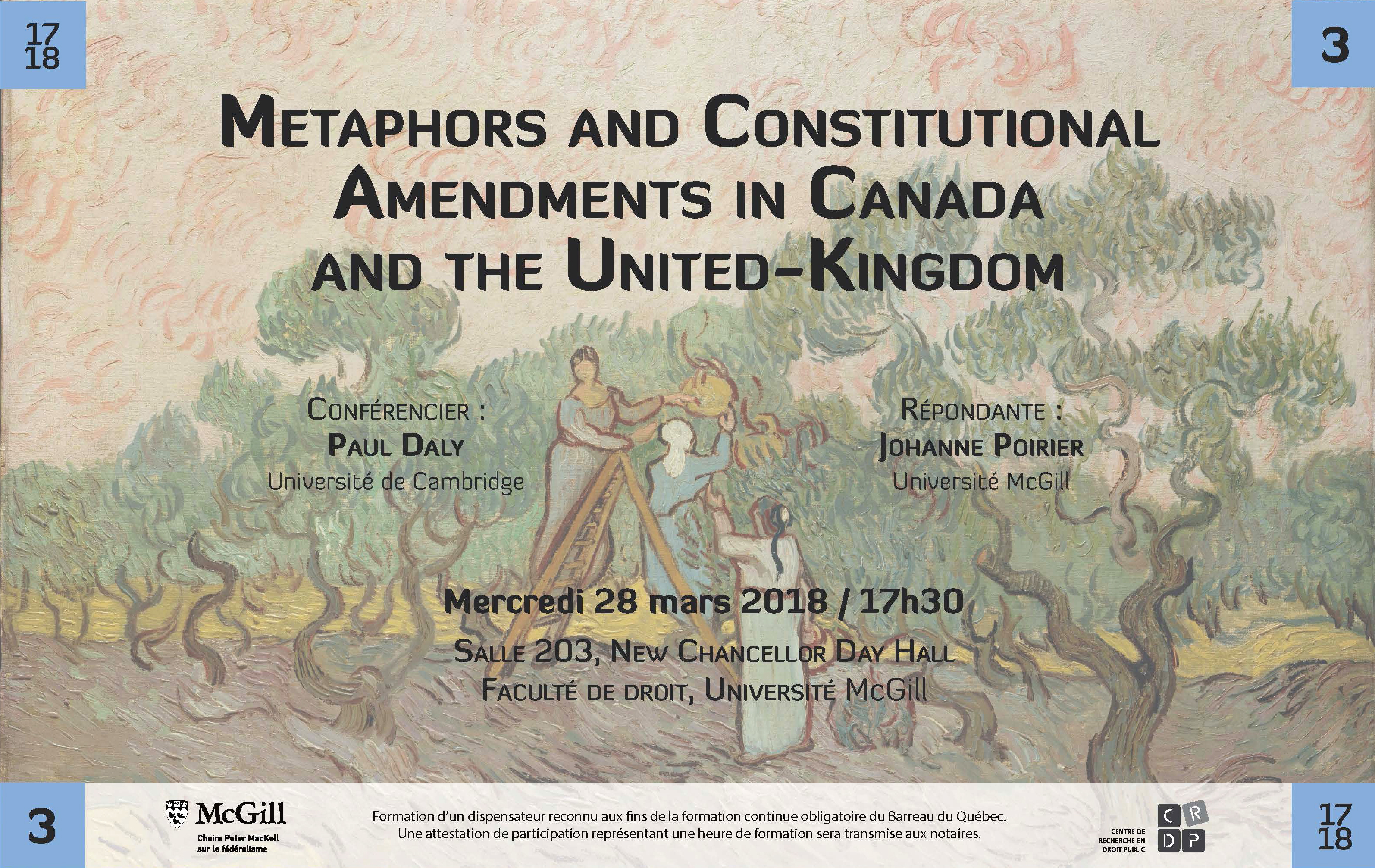 The MacKell Chair is co-organising a Constitutional Moment with Paul Daly, Professor of Law at the University of Cambridge. Find out more...

Constitution of Canada, 2017: Reinventing the fundamental law of a plurinational State

We held a Constitutional Moment talk with Professor Johanne Poirier (McGill U) and Professor Daniel Turp (UdeM), and their students. Find out more. The Faculty of Law's annual alumni magazine, Focus Law | droit, featured an article about the Chair's activities this year regarding Canada's 150.

The Peter MacKell Chair in Federalism aims to reflect on the foundations, potential, risks and concrete incarnations of the “federal phenomenon” understood broadly.

The inaugural holder of the Peter MacKell Chair is Professor Johanne Poirier.

The Peter MacKell Chair in Federalism was created at the Faculty of Law thanks to a generous bequest from Peter R.D. MacKell. Admitted to the bar in 1951, he began his career with Duquet MacKay, later moving to Martineau Walker, today known as Fasken Martineau. He led the firm as Chairman for several years, before retiring in 1995.

Peter MacKell handled many significant litigation and commercial briefs in the course of his career, representing major Canadian and foreign clients. He was also a highly sought-after corporate director, and a member of the board of Goodfellow inc. for many years, as well as a director of the Régie de l’assurance-dépôts du Québec.

There are currently no events available.